As I looked at last night’s Party of No Brains debate, I recalled my prediction of Donald Trump’s strong shot at being that party’s nominee — even before his first candidate debate.

Back then, I made parallels between the cultural pessimism Americans faced during the late 70’s — which catalyzed the election of Ronald Reagan to the presidency — and today’s environment where Americans once again feel they are in a life and death struggle to ensure their country’s best days are not some speck of a distant past.

Trump is no Reagan, but the former represents the derivative output from more than 35 years of hamster wheel partisan battles which has taken your attention from how the American Dream has been slowly disintegrating during the Beltway reign of both the PoNBs and the Party of no Guts.

A long time ago on another online channel, even before I gave my Trump forecast, I said too many of you are party trippin’ — caught in the game of blaming the “other” political party for America’s challenges while you, your comrades and the ground troops of your supposed domestic ideological opposite are caught in the same vortex.

And just like the way retailers kick-off the Christmas shopping season earlier each year to direct your focus toward their desired result, both political parties have successfully wired your emotions for year-round party trippin’, thus making the idea of an election season virtually meaningless.

You fell for the partisan blame game. And you can now call Trump — along with millions of his conveniently race-baited followers who “don’t like the direction this country is headed” — your prize.

Yet the bipartisan attack on Americans’ prosperity and freedom happened about four decades prior to Trump’s campaign march.

The median wages of the middle class were stagnant since the days of President Ronald Reagan’s administration, and have actually decreased during the last 15 years.

Meanwhile, home prices have increased by more than 300 percent, causing the home ownership rate to take a nosedive.

Personal consumption increased by a factor of nine-plus since 1975 — far outpacing the US population growth of 47 percent. 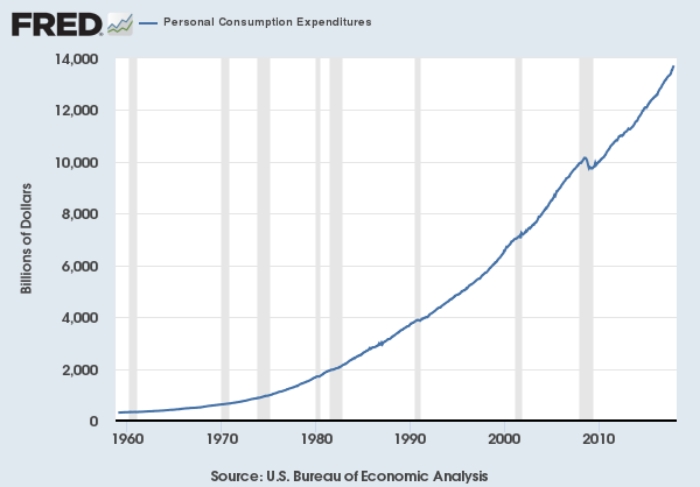 While the cost of nearly everything began to pull away from the ability of many Americans’ to purchase goods and concurrently maintain a financially stable household, the number of two-income families has increased to a record number.

Consumers drove up non-mortgage debt by 775 percent. I know that large-screen TVs and Air Jordans quickly come to your mind, but you also have to consider student loans, automobile purchases and rising health care costs as major debt drivers.

These days, we have a better understanding of why the PoNGs and the PoNBs were so anxious to boost homeownership in the first place: to help their banking benefactors overinflate home prices and make more money in the financial markets — until the 2008 implosion.

That last point is very important to understand an aspect of the game being played on you. The fight between the PoNBs and the PoNGs over whether or not the 2008 crash happened because of Fannie Mae, Freddie Mac, the Community Reinvestment Act or poor people trying to rock sub-prime mortgages is a farce. Neither party wants to discuss the real issue: banking deregulation at the expense of the poor and middle classes.

Speaking of middle class, they’ve become an endangered species.You should read this.

Have you noticed signs of a shrinking American middle class? https://t.co/2gt9WK2GwB

The labor force participation rate — or the percent of adult Americans working or actively seeking employment — has dipped to a near 40-year low. This makes any president gloating about reducing unemployment in 2015 the owner of a naive belief or blatant lie.

Strangely enough, the past 35 years of “prosperity” has almost exclusively benefited the rich. Or perhaps even longer.

And neither party is serious about ending poverty. Read their 2012 platforms, if you want proof.

Some of you blame the PoNGs and President Obama for the heavy-handed 2015 American surveillance state — a suite of technologies designed to protect America from terrorism — while others blame Bush The Second and the PoNBs for starting this invasion of freedom.

All of you are wrong. Mass domestic surveillance has been alive and well since the 1980s, and continues to exist through the subsequent five PoNBs presidential terms and four from the PoNGs.

A successful argument can be made that mass domestic surveillance started during the 1960s. Or perhaps longer than that.

Another amazing part about the game being played on you is that the PoNBs and the PoNGs have convinced you, your comrades and the ground troops of your supposed domestic ideological opposite to blame each other for the troubles in Ukraine, Syria, Southeast Asia and other theaters. Meanwhile, America continues to inch toward war in these areas, regardless of the party in power.

Whether you believe the priority is to save America from itself or Trumpism, the two-step prescription remains the same: stop party trippin’ and walk away from the hamster wheel …

song currently stuck in my head: “this nearly was mine” – cecil taylor