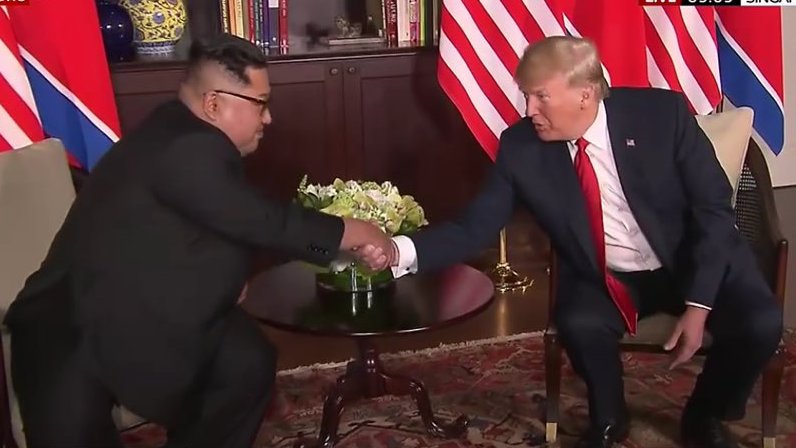 Some of you act as if US President Donald Trump’s negotiations with North Korea President Kim Jong Un — in progress as I write — will matter.

And neither will a mythological new deal Trump wants to craft with Iran, nor the spectre of diplomatic brilliance commonly associated with the current nuclear arrangement that was forged by a previous presidential administration who played themselves.

I write in real time and just decided to cover Iran in a future piece, likely the next one or right after that. Soon, I’m sure.

So, I’ll come back to North Korea.

Have you ever considered that throwing down is what a not-so-trivial number of American leaders, regardless of political party affiliation, want all along?

This is why I’m not the least bit surprised there are some Democratic members of Congress who are shedding the anti-warhawk disguise to sound like hard-liner Republicans when discussing the upcoming talks.

Empires spend an equal amount of violent energy between overthrowing regimes they don’t like and supporting the ones they do.

It’s been that way for centuries.

The long-standing evidence of the US’s desire to mack North Korea is so scriptural that the only question left to be answered is either [1] does the US wish to fight concurrent wars with North Korea AND Iran; or [2] which war does the US want first.

Leave aside — for a moment — that no rational President looking to avoid the conversion of brown, olive and yellow nations into Pol-Pot workshops would ever put a Project for a New American Century alum and North Korea regime change advocate like John Bolton on their team. You can also check this mainstream media site for more info on PNAC’s influence in Washington.

You can still uncover America’s intent by digging into one source whose axiomatic waft has influenced the policy patterns of red, blue and purple White House administrations over the years: The Global Chessboard, written by late National Security Advisor and decades-long White House consigliere Zbigniew Brzezinski.

Written in 1996, The Global Chessboard reads like an American manifesto for pimping everything short of the universe.

I rapped about the book a few months ago, and left you with this Brzezinski quote that explains everything you need to know about America’s military presence on the Korean Peninsula:

… [T]he retention of the American presence in South Korea becomes especially important. Without it, it is difficult to envisage the American-Japanese defense arrangement continuing in its present form, for Japan would have to become militarily more self-sufficient. But any movement toward Korean reunification is likely to disturb the basis for the continued U.S. military presence in South Korea. A reunified Korea may choose not to perpetuate American military protection; that indeed, could be the price exacted by China for throwing its decisive weight behind the reunification of the peninsula.

Any close relationship between the two Koreas would immediately question the point of America’s presence in the region.

A conservative estimate of the number of US troops in Japan and South Korea would be 70,000.

Think about the defense contractor revenue associated with supporting those troops, including the procurement and maintenance of bases, weapons systems and other infrastructure.

What corporation, whose target market is the US Department of Defense, wants to see that kind of hit to their stock price?

So … it’s not all about North Korea.

It’s more about the US maintaining its influence in Northeast Asia.

It’s also about the US maintaining a footprint in the developing regional economy called the New Silk Road. I wrote about that topic last September.

And if there’s any truth to the story that North Korea is sitting on the largest deposit of rare earths in the world, we may now know why Trump made a reference to North Korea’s prosperity.

So perhaps the Kim regime has a lifeline — assuming there’s a willingness on North Korea’s part to go further than denuclearization by providing unprecedented US access to a lopsided trade agreement.

I don’t believe North Korea, which really wants money more than anything else, is that dumb. Trump’s recent unilateral nullification of the Iran nuclear deal means Kim will want America to make extraordinary concessions to win his confidence.

Good luck to that hopeful convergence of plans, Trump and Kim …