Now that we’ve covered the pitfalls of putting your trust in deal chasers to craft America’s military strategy and NATO relationship, what do you say about tackling climate change and the inner workings of President Trump’s brain?

Let’s first deal with what the media calls a “shocking” reversal: Trump’s acknowledgment that climate change is real, despite his earlier dismissal of the phenomenon as a hoax and Chinese conspiracy. 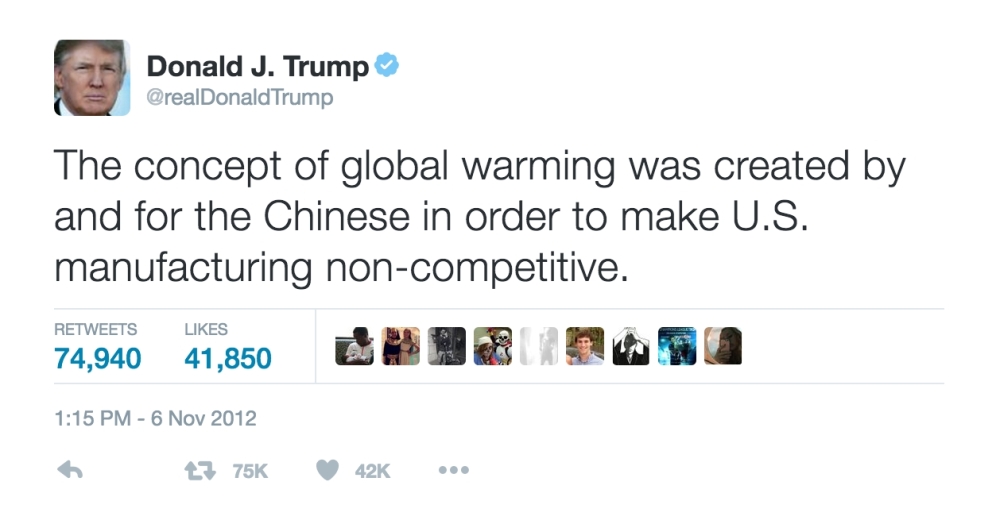 I’m sure Trump knew all the time that climate change is real!

Some of his oil peeps have known for at least 40 years that climate change is real — even while they denied its existence.

And if oil companies wish to remain in denial about climate change, shareholder activism is working hard to keep everyone honest.

For example, here’s the most recent acknowledgement of climate change by ExxonMobil. I took a long screenshot because you never know these days. I’ll continue my thoughts after the graphic …

Let me repeat what I’ve shared with friends: climate change is real but the media outrage over President Trump’s decision to pull out of the Paris Accords, the compliance strength of those Accords and even Trump’s decision are simply symbolic.

Trump had a choice between telling coal miners and unemployed Rust Belt workers before his trip to Europe that he sees no future in carbon-based energy sources, or saving a crucial component of his support base by giving that “Coal is our future” meme a longer life.

This decision was a no-brainer in Trumpland. He plans to run for reelection in 2020.

Meanwhile, Team Trump aims to use this new outsider position to negotiate a more favorable — here comes that word again — “deal” for American companies in exchange for participation in the agreement.

And once again, deal-think is preventing Trump from reimagining a problem and discovering its insightful solutions.

The Paris agreement has no teeth to ensure compliance and participation in the agreement is voluntary.

In theory, this means a country can sign the agreement and do absolutely nothing to help save the planet, or do the complete opposite.

The media and public outcry over Trump’s Paris agreement decision misses a larger point: Trump could have used renewable energy as a way to inject new life into America’s tired economy.

The two questions Trump should be asking right now are:

I rapped about this a few years ago on another channel: America needs a NASA-like program which will create the next wave of jobs, as well as drive new and innovative investments in education and training.

Renewables could be that industry.

This is why I’m scratching my head. It appears that Trump is leading from behind. Ironic, isn’t it?

Sure, American cities like New York can continue to drive local investments in renewables.

But the bigger win happens when the US President drives an industry’s national agenda through targeted tax incentives, education policy initiatives and meaningful public-private partnerships.

Such an agenda shifts America further away from its “consumer” status and closer to that of a “producer.”

Who could argue with that kind of national transformation?

By leading from behind, Trump will have allowed other countries to take the lead in renewables and shape this industry.

As a result, Trump will not only maintain America’s consumer status, but he will also miss a rare opportunity two create a future for America that both political parties could support.

Trump’s major miss on climate change brings up a question I raised in the last post: are we witnessing some kind of game to keep the two parties at war?

song currently stuck in my head: “after the moon“ real estate