WHO THE HELL IS ‘GUCCIFER,’ AND HOW CAN HE PUT HILLARY CLINTON IN JAIL?

What does a Romanian hacker, whose crimes recently earned him extradition to the United States, have to do with the Hillary Clinton jail post I promised?

Perhaps nothing — or plenty.

The hacker in question is Marcel Lehel Lazăr, better known as Guccifer, and he’s responsible for the original leak of Clinton emails that started the cluster of federal investigations you’re reading about these days.

Guccifer hacked into the AOL account of Syd Blumenthal, a personal adviser to the Clintons whom President Obama allegedly banned from the White House.

However, it looks as if Blumenthal didn’t stay an adequately far distance from Clinton while she handled business as US Secretary of State.

In addition to sending cordial emails regarding family and friends, Blumenthal sent to Clinton’s private email account highly sensitive, intelligence briefings regarding hotspots around the globe — a handful of which Guccifer leaked to politicians and media outlets.

And that’s how the Clinton email scandal blew up.

Instead, Guccifer duplicated Blumenthal’s emails as graphics with with what I think is one of the cheesiest fonts in the history of typography.

This leak-through-duplication method can easily lead one to believe the documents could’ve been embellished by Guccifer, if not completely falsified.

Except Guccifer’s submissions are duplicates — both in style and content — of the emails released by the State Department two years later, under a judge’s order. Guccifer also attached a screen grab of Blumenthal’s email inbox as a way to underscore authenticity.

In fact, Guccifer’s leaked emails would eventually be found in the broader State Department’s coerced release of Clinton’s collection of emails sent and received during her tenure — save for the 2,100 emails considered “Top secret” or “Classified.”

One of Guccifer’s Blumenthal leaks which didn’t make the State Department’s tranches of releases is a February 16, 2013 email to Clinton which linked the September 11, 2012 Benghazi attacks to rich, Sunni Islamists in Saudi Arabia. An excerpt of Guccifer’s email leak is below, followed by three questions I have. 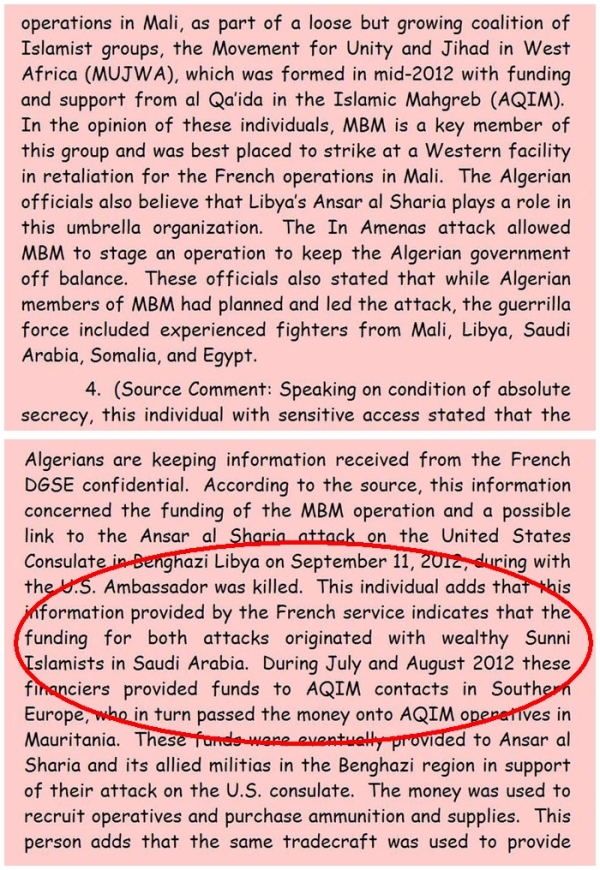 First — this is HUGE news. What happened to this email about the Saudi Islamists? Should we assume the email became a member of those “Confidential” or “Top secret ” categories? Does it make sense to even call the information a secret at this point?

Second — is anyone following up this Saudi lead, since everything else about Guccifer’s leaks appear to be on point? If the answer is “No,” why?

Third — does Guccifer have any more disgusting Clinton email goodies to share?

Could the third question — Guccifer’s long history of illegally hacking US government officials’ emails notwithstanding — contribute to the reasoning for Guccifer’s extradition to the US, particularly in the face of a ramped up criminal investigation of Clinton’s emails?

Answering the first question could point to strong evidence for an indictment. If the State Department saw the email but chose not to release it, that means the email was too hot to handle on Clinton’s personal email server in the first place. In other words, Clinton broke the law.

But what if the State Department doesn’t have the email? Assuming Guccifer’s leak is 100 percent accurate, we’re now looking at the possibility that Team Hillary destroyed evidence — another criminal offense.

The February 16, 2013 Saudi email is a tricky issue since Clinton, at soonest, saw it about two weeks after she left her State Department post.

This is where Guccifer, and that third question, come back into the frame. He may know what happened to any missing Clinton email — during and after her tenure …

Let’s pull together these pieces, shall we?

The missing Saudi email aside, there are approximately 2,100 emails which have been categorized by the federal government as too sensitive to be anywhere near Clinton’s personal email account — we’re now talking about many violations of federal law.

While the mainstream media was caught up in how Clinton’s staff thought she looked cute in the photo of her holding a BlackBerry device, the government’s email releases point to the way Hillary rolled in the State Department: channeling guns to jihadists; callously supporting Libyan militias that performed ethnic cleansing against unarmed, dark-skinned Africans; supporting France’s military campaign against Libya’s Muammar Gaddafi regime so that the former can take the latter’s gold and oil; repurposing the State Department as a fundraising apparatus for the Clinton Foundation; advocating for violent civil war in Syria, which has led to the deaths of thousands of civilians and counting.

These emails provide not only a compelling case for Clinton doing jail time for her mishandling of sensitive information, but they also provide additional reasons to investigate other possible crimes committed.

Anything less than an indictment against Clinton — and I’m not talking about simply throwing her staff under the bus — would be outrageous.

4 Responses to WHO THE HELL IS ‘GUCCIFER,’ AND HOW CAN HE PUT HILLARY CLINTON IN JAIL?