Why did crowds of people in Upper Marlboro, Maryland walk out during President Obama’s campaign speech for gubernatorial candidate Anthony Brown?

My guess Either President Obama has become a tired brand in America, or the American public is having a serious disagreement with Number 44 over what an economic recovery looks like.

Think of it this way—the audience stayed for a few moments to presumably hear what the President had to say, and decided to walk out…?

What did the President to drive folks away?

We’ll have to review his speech to get some answers:

Over the past four and a half years, our businesses have created more than 10 million new jobs. (Applause.)

The applause presumably didn’t come from the more than 92.5 million Americans who left the labor force. This chart has not looked encouraging since 2000…

Back to Mr. Obama:

For the first time in six years, unemployment is below 6 percent.  (Applause.)

The chart above shows a sliver of an uptick, but that’s not a sign of hope—the income growth of the richest Americans drove up much of the median income.

Do you need proof? Look at this Gini chart. Here’s an explanation of Gini, in case you need it… 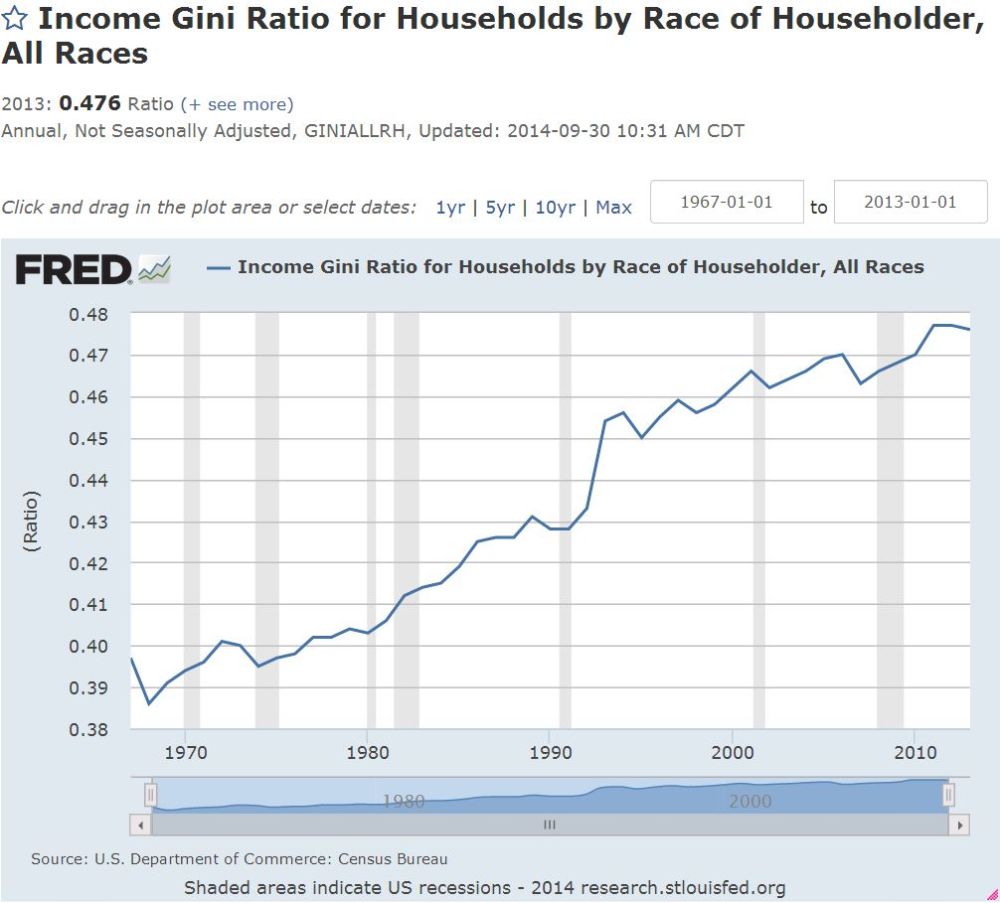 Back to the speech:

A housing market that was reeling is now rebounding. (Applause.)

I want you to look at this chart of home prices:

Now, go back to the median income chart I posted a few paragraphs ago.

Home prices are once again outpacing income growth—y’know, like what happened before the housing bubble burst in 2007. This also means the middle class will continue to have a difficult time managing household expenses.

A manufacturing sector that was shedding jobs for more than a decade is now growing at nearly twice as fast as the rest of the economy.

Uh, this is why context is so important:

About 10 million Americans have gained the peace of mind of health insurance just in one year alone.

You already know what I think of Obamacare.

And I only reviewed the early part of his speech!

I wouldn’t walk out of any room where a President is speaking, but it’s not hard to understand why some voters would head for the aisles.

In fairness, the charts I posted clearly show that the components for economic freefall were being assembled before Obama took office, but none of his current policies will help to prevent a Japan-style lost decade—and there’s a chance that the middle class will face worse times in the future.