Posted on September 24, 2014 by mentalunrest 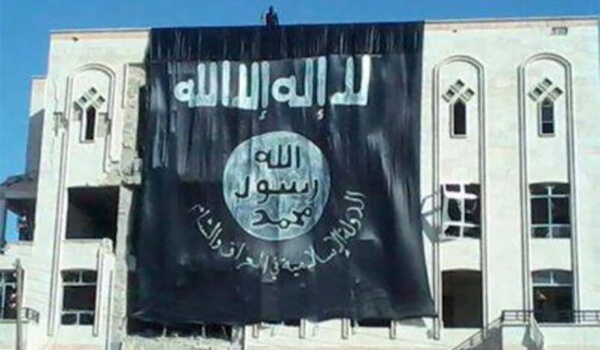 While President Obama and other world leaders converge on the UN General Assembly and clog New York City street traffic, It may be a good time to map a few of the latest ISIL news stories to the themes I’ve been writing  about.

To fully understand where I’m coming from, read:

A better way to destroy ISIL
The ISIL strategy is purple
A cause for the Syria civil war made public
Global War on Terror, take 2

Commit US troops, or not?

Remember, kids—the US is only committing a  handful of advisors to help local forces defeat ISIL!

But isn’t that how America’s entry to the Vietnam War started?

An equally important point I’ve been making is that contrary to what President Obama’s been telling you, US air strikes alone will not defeat ISIL—a significant number of ground troops will be needed.

But where will these troops come from?

Saudi Arabia? Please. I’m neither a military nor betting man, but I’m willing to bet that  ISIL will make short work of any collection of Saudi troops. Besides, Saudi Arabia is too strung-out over getting rid of Syria’s Assad regime to seriously think about fighting ISIL. The Saudis public condemnation of ISIL is almost hilariously hypocritical, but I’m not surprised that Saudi Arabia would join America in viewing ISIL as a bunch of disposable jihadists. This means the Saudis will give symbolic words of encouragement, fly-over rights or even money, but a team of Saudi troops sent to sort out ISIL would get whooped.

Turkey? Even if the story about Turkey completing a land deal with ISIL is false, the former still joins the Qataris and Saudis in the “I have  zero motivation to fight against my interests” camp.

Iraq? Depends on the sect and which part of the country we’re talking about. The Iraqi military is for the crapper, but the militias in the country’s south would destroy ISIL. BUT…getting these militias to fight battles beyond the south will require plenty of encouragement, and will not happen for free…

Iran? It has a highly motivated and capable military, but the US doesn’t like Iran and Israel wouldn’t be happy about that kind of alliance. Iran currently has at least 500 members of its elite Revolutionary Guards Quds force in Iraq.

Israel? Nah. Let’s leave it at that. Nah.

Hezbollah? Oh, hell no. That’s a huge non-starter, and not because Hezbollah isn’t a country. The US wouldn’t entertain that thought for a second.

Afghanistan? ISIL would have the Afghan National Army for snacks.

Which means if there is an interest in a ground invasion of the territory ISIL currently holds, The US and Europe would have to commit troops—which will not only resemble another chapter of the Crusades in the eyes of many Arabs, but a Western-led ground war will also play magnificently well with ISIL’s social media and recruitment strategies.

These clowns-in-suits worked two days in August and five out of September, but they managed to approve a funding bill to avert a government shutdown, as well as pass another bill to give those unpredictable Syrian rebels weapons and training. The measures were approved just before these paper chasers skipped town again to campaign for their November reelections.

Even if our legislators had rock star aides, do you honestly believe that any ounce of analysis preceded the Syrian rebel vote?

I’ve been saying for a while that Iraq’s post-invasion problem boils down to three factors—Shias, Sunnis and Kurds. Al-Qaeda received an honorable mention as #4, but the assessment assumed that the US would not exacerbate the problem it originally created for Iraq and Syria when it let Al-Qaeda out of the bottle. The failures in US military and diplomatic strategy which resulted in these factors being ignored before, during and after the 2003 Iraq invasion contributed to the mess you see today.

I’m not the only one who was aware of this problem. CIA director George Tenet, despite his slam-dunk credibility issues, warned Bush The Second about Iraq’s sectarian conflict risk prior to the Iraq invasion.

Congress never thought about the implications of jumping into Iraq, and I think they put the same level of consideration into Syria.

You cannot trust Congress—well, at least the people currently in those seats—with American foreign policy since the body exhibits a textbook case of head-in-assism. Only money, or an issue that puts their reelections at stake, smokes them out, but you would still have those trust issues to deal with.

Do Americans think Iran is filled with backwards hicks who will put aside camel-dealing only when the time comes to stuff their infant babies with plastic explosives and blow-up stuff in the name of jihad?

Iran fully understands the threat ISIL presents, but the Islamic Republic will also be careful of what they may perceive as performing America’s bloody work. I’ll remind you that America caused the ISIL problem.

Iran and the US should want to join forces to defeat ISIL. It’s time for the two countries to have an adult conversation about their common foe.

America is blowing another chance to get some ground troops! If the US can combine forces with Russia to defeat Nazi Germany in World War II, I think America can form a convenient alliance with Russia, Syria and Iran to liquidate ISIL. Besides, ISIL poses a greater imminent threat to America than Syria does. But we all know that pipelines stand in the way of such an alliance, right? I’ll repeat—talk, guys…

Let’s crystalize what Saudi Arabia has done: their petro(US)dollars buy American arms and nesting opportunities for Islamic extremists across the land; the country’s one-track focus on overthrowing Syria’s government helped to create the ISIL monster it can no longer control; and the Saudis now look to the US for help in defeating this beast. I’m sure you noticed that trick too…

President Obama indicated that ISIL targets in Syria are fair game, and has now proved that he wasn’t joking—except there was no discussion of sovereign equals with Syria, one of two countries under siege by ISIL at the moment, about this idea(!)

This brings up a question: what kind of bombing does the US want to conduct in Syria? Perhaps the kind of bombing which destroys ISIL targets and concurrently weakens Assad? Just asking. Russia may have similar suspicions since it’s no secret that the US wants to remove Assad…

A number of Iraqi and Syrian cities—inclusive of artifacts with economic, religious and historical significance—are being destroyed by ISIL or during the Syria civil war. Some of those items are being sold in the underground market. Iran’s army appears to be addressing this issue in Syria and Iraq the best way they could, but plenty of documented history is still at risk of disappearing or are already gone forever. Not sure who outside the region cares…

The future will not be pretty

I doubt that Syria will ever be the same, regardless of how this episode ends.

Assad conceded land to the Syrian Kurds as a way to reduce his distractions during the civil war he’s fighting, and perhaps to give Turkey—a rival of Assad and all Kurds—something to think about. Of course the Syrian Kurds would love to expand their territorial footprint by uniting with Iraqi Kurds. I just can’t see the Syrian or Iraqi government peacefully getting that land back in the near future.

The minority groups in Syria and Iraq have been facing waves of ethnic cleaning attacks over the summer. They will continue to be a mess for years to come.

Shiite Iran’s military presence in Iraq will not help to give a pleasant vibe to Iraq’s Sunni population.

The West and the Gulf Cooperation Council may be willing to pour money into this Syrian regime change project, but there will be no interest in rebuilding Syrian infrastructure should Assad remain in office. The US hasn’t believed in that post-war nation-building stuff since World War II. That spells additional bad news for Syria’s economy, as well as the health of its people. Who knows, the lack of assistance may draw Syria even closer to China, Iran and Russia. That last thought would brings us to an interesting starting point of sorts…

song currently stuck in my head: “love from the sun” – roy ayers ubiquity