Posted on October 8, 2017 by mentalunrest 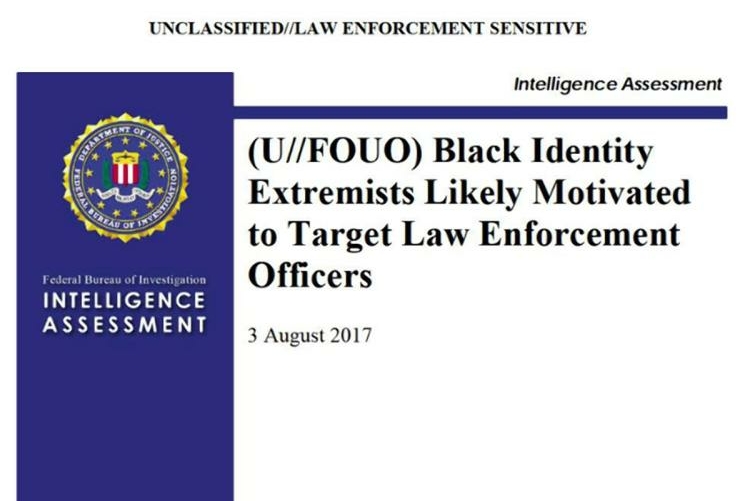 At this point, we’re all aware of President Donald Trump’s deeper-than-subcutaneous dislike towards people of color’s demonstrations against injustice in all forms, so the FBI’s recent intelligence assessment of the threat posed by black identity extremists (BIEs), reported by Foreign Policy, can be viewed as a multi-purpose branding campaign, respectively repurposed from the 1970s and turn-of-the-century COINTELPRO and anti-communist playbooks with an eye for political hyperbole and “all-y’all-negroes-think-alike” ideological conflation.

My summary doesn’t make this report any less dangerous. Check its pedigree and executive sponsorship …

… although I can’t refrain from wondering how intelligent — okay, unoriginal — the assessment really is.

It sure as hell looks like a report previously published last summer by the Southern Poverty Law Center.

I’be spoken to or watched many Progressive thinkers of African descent, and not a single person advocates the assassination of police officers.

Yet, Trump and ‘Em amazingly built an inevitable case for suppression of divergent Black thought by stringing together six disparate instances of police deaths, and then building a marketing brand called BIEs.

As if these killers compared notes each Sunday over brunch.

The takeaway is that you can now become “Moor of interest” by simply saying “I don’t think it’s cool for Black folks to be shot with their hands in the air.”

If uou find that hard to believe, check out the government’s surveillance of Dr. Martin Luther King, Jr., who was branded a communist during his lunch counter integration days — arguably the least-threatening period of his activist life.

Meanwhile in the present, a larger and more dangerous population called White extremists doesn’t get as much public attention by Team Trump, which proves #45 is either [1] a White supremacist; [2] a race magician once again reaching into his bag of distractions; or [3] both.

Let’s dig into the second premise — there can never be a point on the political timeline where the vectors of dislike, displayed by people of color and White people, converge.

Therefore, White extremists have to become the unwitting supporters — if not enforcers — of current and future policies that favor the elite.

And calling these ungrateful darkies “Moors” only helps to place more emotional momentum behind enforcement.

No, I still don’t think Trump is the elite’s top shepherd for inequality, but they’ll put him to use while he’s around …