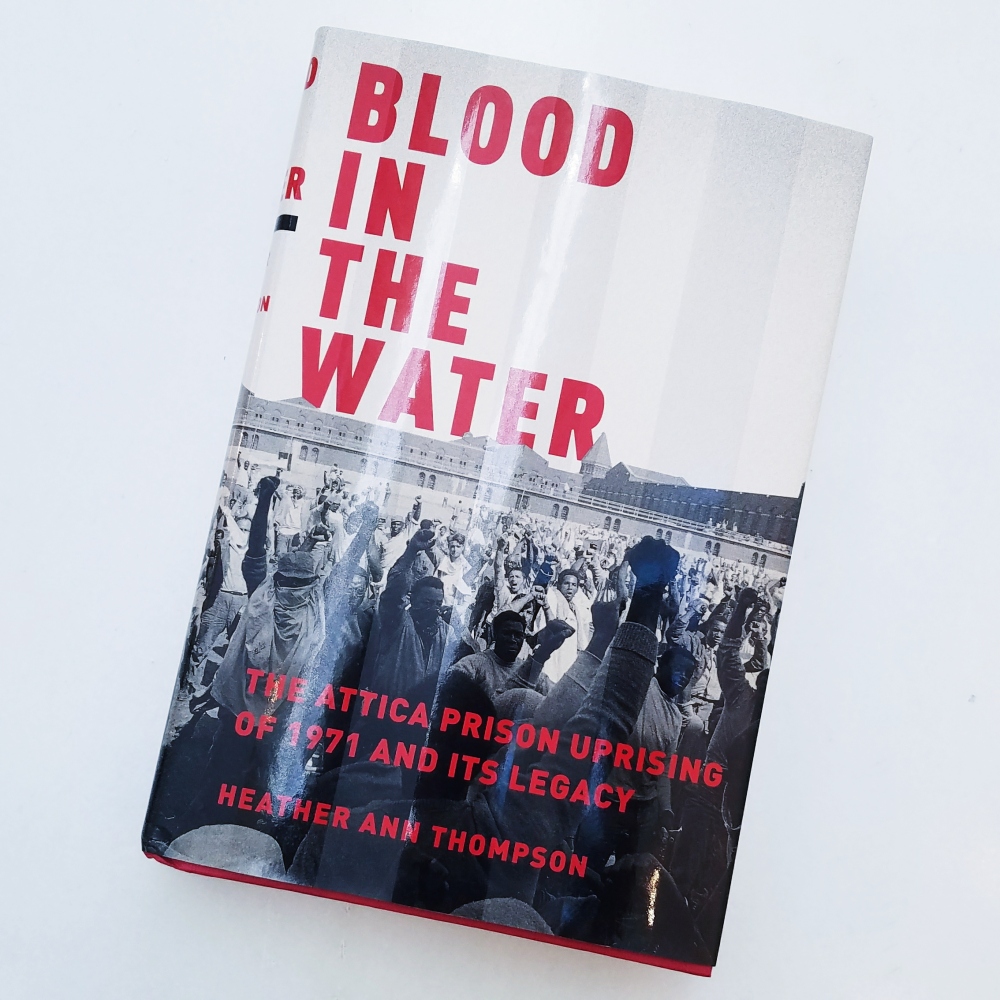 “A state-sanctioned lynching” and “Bipartisan political cover-up” are only two of the screaming thoughts I had while reading Blood in the Water: the Attica Prison Uprising of 1971 and its Legacy, by historian Heather Ann Thompson. Blood in the Water is a National Book Award finalist for Nonfiction this year.

Of equal wrecking power are the points Thompson delivered through her well-researched book — at a volume barely below a whisper — about New York State’s suppression of the famous prison rebellion.

Blood reports an undisputed point about the early stages of Attica Prison’s rebellion: the inmates killed a New York State Corrections officer, took control of significant wings of the prison complex and held 39 hostages, most of whom were prison guards.

Almost everything else after that point in the story has been up for debate, or subject to censoring by the New York State government.

We also know that 28 unarmed inmates and 10 hostages were shot and killed after New York State troopers and corrections officers retook the prison.

Despite decades of interference on the government’s part, we now know many more facts about the uprising and its needlessly blood-soaked aftermath — and Blood delivers those artifacts in angering detail.

I arrived at these 10 takeaways after reading the book.

1. If suppressing the Attica rebellion wasn’t a lynching, then what the hell would you call it?

After New York State decided to retake the prison by force, it came up with an counter-assault plan: drop debilitating tear gas into the prison and then storm the occupied wings with armed police officers and prison guards.

But this second-string team of rescuers — the National Guard was waved off the operation and assigned to dealing with only the aftermath — had no training or experience in retaking buildings. Thompson presents an example by profiling state trooper Tony Strollo:

Tony was secretly troubled, though. He knew that troopers had a lot more experience stopping speedsters than storming a prison. Tony had been assigned his own .38 sidearm, and about 3 times a year, he and his fellow “Staties” would go to the shooting range to practice just in case they ever needed to use their weapons with an unruly citizen. But they were also being handed .270 rifles. Tony had absolutely no training in the use of this weapon and he knew that was true of most of the other officers.

Rifles used for stopping bears, along with silver-tipped bullets designed to cause an immense amount of internal damage after impact, were issued to officers where even years of hypothetical training to compensate for their lack of experience would still be dwarfed by their personal disgust and overwhelming need for for vengeance against these rebellious prisoners. After all, the law enforcement community is like a family.

Rescuers who didn’t have .270 rifles were issued shotguns loaded with wide-spraying buckshot — one of the last weapons you would think about bringing to a hostage rescue situation.

Other officers brought their personal weapons like .44’s and .357 magnum handguns.

The rescuers also removed their badges prior to the retake operation.

And then there were those White Power chants …

Hell, all they needed was some corn liquor and a fire to complete that Klan rally look …

2. The retake operation was over-the-top ugly — and deadly.

In addition to the 28 inmates and nine hostages killed by gunfire, scores of inmates were shot and wounded while hundreds of additional inmates were tortured or severely beaten. Blood cites the accounts of National Guardsmen who were summoned to the prison to provide medical assistance after the retake operation ended.

The Guardsmen witnessed many instances of inmates being tortured after the retaking while police and correction officers shouted racial slurs. Prison officials refused to send many of the wounded prisoners to hospitals. State officials ignored the Guardsmen’s reports of torture — and the retribution against the inmates continued for many months.

3. The government tried to cover-up how ugly the aftermath really was.

From the early moments of the retake operation, prison spokespersons were telling the assembled press that inmates were slashing the throats of hostages. The government not only continued to push this lie days after retaking the prison, but they also maintained that knife wounds were responsible for the guards’ deaths.

But The State clearly freaked out after the County Medical Examiner found no fatal knife marks on the throats of the dead hostages (save for a small, non-fatal nick on the back of one guard’s neck) and ruled the causes of death as gunfire. State troopers were organized to visit funeral homes in the area, and coerce morticians to write affidavits to the contrary. A second ME, brought in by the state, corroborated the county ME’s findings.

The State continued to suppress evidence of hostages who were killed by their rescuers, and spent almost all available resources trying determine how one guard died during the early stages of the uprising.

The rebellion erupted after years of disrespect and abuse suffered by the inmates at the hands of prison guards and administrators. Thompson explains:

A number of correction officers thought that prisoners should be offered more vocational and educational training opportunities instead of just being warehoused, but the docs always cited it severe budgetary constraints as barriers. Administrators also failed to provide the prisoners sufficient food because they were told to watch the bottom line. As one correction officer put it frustratedly, “if you can spend an extra dollar on feeding, it would solve a lot of problems.”

Prisoners had a shortage of clothing, and were put to work where many of them earned not much more than $0.06 a day. Those earnings were used to pay for warmer clothes, toiletries, underwear and socks.

The prisoners were issued a bar of soap and one roll of toilet paper a month.

In addition to inadequate health care and censorship of relatively tame newspapers like the Amsterdam News, prisoners were permitted only one shower a week and two quarts of water a day. And as Thompson explains:

“With this water prisoners were expected to wash their socks and underwear, shave, brush their teeth, and clean the cell to a correction officer’s exacting standards.”

Thompson doesn’t make excuses for the uprising and the guard killed by the inmates, but she also highlights that low-cost solutions were available for The State to pursue — but they ended up choosing a bloody and high-cost one.

“But who cares,” you may counter. “Aren’t we talking about prisoners whose dangerous criminal pasts forfeit any claim to rights?”

The 28 unarmed prisoners who were shot and killed were already given prison sentences — and having a face nearly removed with a shotgun blast at point-blank range, after being felled by a high-powered rifle shot, was not a part of any judge’s prescription.

James Robinson, whose killing I just referenced, is one of many examples Thompson provides, and details how The State and its hired warriors committed recurring atrocities with each bullet fired. A photo of a wounded and unarmed Robinson, above, was taken just just before his death. Seconds later, another Robinson photo was captured — except he now has a spray of blood next to his head from the follow up shooting and a large, homemade blade lying next to his limp hand. Robinson was in the same position in both photos, which refutes the claims of the state trooper who shot him that the dead prisoner lunged at the officer with a blade.

Nonetheless, the State not only didn’t investigate Robinson’s murder or the ones like it.

The disrespect focused on areas most of us take for granted — there were reports of prison guards destroying inmates’ eyeglasses and dentures.

Just like the reaction to the Twin Towers’ collapse, US political leaders in the early 1970s conveyed the message that America was faced with an existential war, except the enemy back then took the forms of Soviet Union Socialism, China’s Communism, the Black Liberation movement, Women’s Lib, the Anti-War movement, Hippies, the White Radical Left, whatever was left of the Civil Rights movement as well as Angela Davis and anyone like her. In other words damn-near anyone with an opinion was viewed as a possible enemy of The State.

The Attica rebellion occurred on the heels of George Jackson’s death and the Soledad Prison uprising. Fearing a trend, the alphabet soup of spy agencies, including the National Security Agency, paid attention to the developments in Attica.

7. Protectors of our society, or straight-up paranoia?

The State was aware that a rescue operation would cause civilian deaths. But as Blood explains, there was no imminent threat to the hostages.

8. Why was The State’s response so heavy-handed?

To teach nigras across the country a lesson, of course.

Thompson explains that President Richard Nixon and New York State Governor Nelson Rockefeller felt the Attica prisoners, who were mostly African descendants, were driven to action by the Black Liberation movement. The last thing the government wanted was for prisons across the country to be inspired by Attica’s events.

The implication: government officials also thought the Attica incident was a rebellion, and they feared a domestic version of the Domino Theory.

9. The State cared about no one — not even the lives of its hired guardians.

As if rescuing a hostage with a wide-spray shotgun didn’t offer a sufficient hint about how little The State cared about its own, There was no proactive and meaningful offer of financial restitution made to families of the prison guards killed by State of New York. I won’t say much else; read the book to find out how that episode ended.

Nope. Not even for killing the guards. Let me know if you found one.