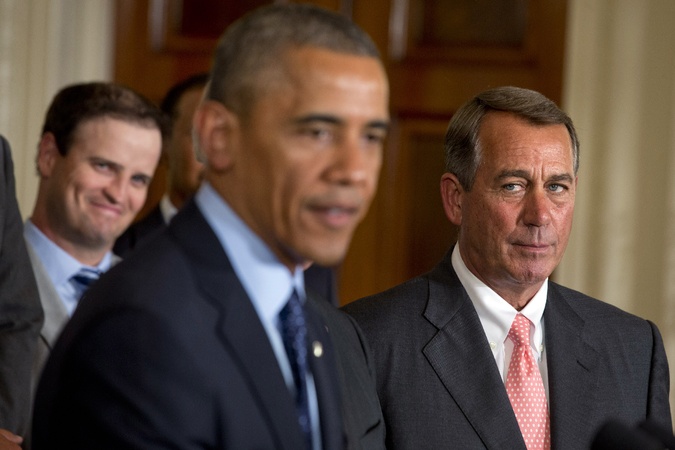 Some of you may be offended by me equating the Republican takeover of Congress with political instability—a reference that’s normally reserved for developing nations.

But it’s hard to resist posting about the volatile chemistry between Party of No Brains’ new control of Capitol Hill and President Obama, the leader of the Party of No Guts.

Just like the last rumble over the debt ceiling that raised enough political stability concerns to drive a few credit ratings companies and China’s official news agency to respectively downgrade America’s credit rating and call for the removal of the US dollar as the world’s reserve currency, the coming fire in Washington can be much worse for many reasons—both obvious and under the radar.

Before I start, allow me to piss-off a few of you Progressives who want to discuss all the reasons why many of your candidates lost this week. While social issues are extremely important to me, I also understand how a legislative agenda which narrowly focuses on minimum wage, pot legalization, and civil rights will do very little to address middle class wealth-building and income inequality concerns. In other words, the PNGs lost both houses this week because they can’t seem to think and chew gum at the same time. And as I said earlier this week The PNBs will lose control of both houses in the future for the same reason.

My point about the middle class is funny in a twisted sort of way since both political parties chase the same 0.1 Percent for political donations that help to fuel these Congressional agendas.

Okay, let’s discuss a few of the obvious outcomes from the midterm elections.

Additional cuts to social welfare programs and government services are a given—even though making those cuts in the absence of sensible alternatives will create a large amount of social instability.

I still don’t expect to see a banker put in jail for crashing the economy in 2008. This means reckless market behavior will continue.

Parts of Obamacare will have to remain in place since the PNB’s will not be able to come up with an alternative approach to balancing the budget. Unless other dramatic budget cuts are made…

The decades-long undeclared war on the middle class will not be rescinded.

BUT…I wouldn’t be surprised if the PNBs-controlled Congress attempts to impeach Obama. For whatever reasons.

I don’t see any improvement in quality of life metrics for people of African descent. But I didn’t see much progress when the PNGs controlled the White House and Congress either.

The war on women will continue, if only to create a diversion from a broader legislative agenda which can make America, as well as the world, a more unstable place.

Let’s talk about this broader agenda…

Social Security. Some of you still have amnesia about Obama being on board with cutting benefits to seniors. He and the PNBs are not too far from a mutual agreement.

Debt Ceiling and Austerity. We already know that austerity doesn’t work (see this, this and this), but that won’t stop the coming budget cuts—which will be prompted by a global markets-shaking debt ceiling war. Buyers of US debt securities will lose patience over this drama, and that won’t be good news.

Trans-Pacific Partnership. I don’t anticipate much disagreement between Obama and the new Congress on TPP. Once this treaty in place, a handful of people will become wealthier—at the expense of the middle class—across the globe.

Iran, Russia and China. I can see the US ramping up efforts to alienate these three countries, regardless of who runs the Beltway. Isolation will only draw these “new” enemies closer together to form a different kind of cold war—and perhaps a major confrontation.

Meanwhile, Americans will fight over the right to smoke weed in public and make $10 an hour flipping burgers…