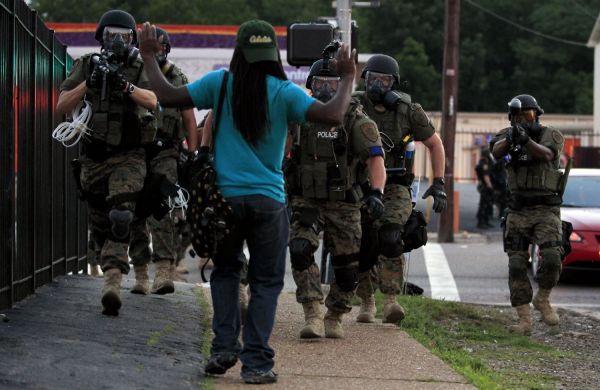 People who ask “How come Blacks can’t get ahead” – whether in inquisitive or derogatorily accusative terms – can look to ArchCity Defenders‘ researched exposé (pdf) of Ferguson Missouri’s predatory law enforcement and court systems for a source of answers which will remind you of America’s post-Civil War Black Codes.

To summarize the research, St. Louis County’s police and courts combine to target Missouri’s most economically vulnerable citizens — who are overwhelmingly people of African descent — for routine police investigations, assessed with relatively large fines for minor infractions, and then jailed when these fines cannot be paid. In 2014. In America.

[B]y disproportionately stopping, charging and fining the poor and minorities, by closing the Courts to the public, and by incarcerating people for the failure to pay fines, these policies unintentionally push the poor further into poverty, prevent the homeless from accessing the housing, treatment, and jobs they so desperately need to regain stability in their lives, and violate the Constitution.

The revelations are an insult to the injury that was already worsened by Mike Brown’s death from a Ferguson policeman’s bullet.

I want to quickly cover the Black Codes for the benefit of some before moving on.

The close of America’s Civil War did not mean newly-emancipated Black people were told “You’re FREE!! Congratulations! Here’s a great job with wages. Now, go on and live that American Dream!”

Nope. Far from it. Ex-slaves had to find a job in some city or village, whether or not they created one of their own.

In the overwhelming majority of cases, transitioning from African-American slave to income earner in 1865 required Blacks to move around a state or between states to establish a living.

White Southern politicians — either through sheer hatred, false paranoia of migrating Blacks becoming a roving crime wave, economic necessity or all of the above — passed the Back Codes, laws which prevented Blacks’ movements and property ownership, beginning in 1865.

One of the most particularly nasty components of these codes were is vagrancy law, where those wandering freed Blacks in search for work I just mentioned would be charged for vagrancy. In other words, charged for job searching(!) They were subsequently fined and sent to labor camps if they could not afford to pay the fine. Of course Blacks had no money, so involuntary labor was an all but certain outcome in these arrests.

In short, the laws were designed to put Blacks in prison and make them slaves again.

By the way, Missouri confirmed its status as a legal predator when the state passed its own vagrancy law in 1889, almost 30 years after the Civil War, and sold African American prisoners from courthouse steps for the purposes of labor provisioning.

Fast forward to 2014, where ArchCity Defenders made observations that make me see almost no difference between the Black Codes of the past and present-day racial profiling strategy.

Let’s start with the traffic stop, as reported in the research, with my added emphasis:

The search disparity by race:

After being stopped in Ferguson, blacks are almost twice as likely as whites to be searched (12.1% vs. 6.9%) and twice as likely to be arrested (10.4% vs. 5.2%). However, this data seems at odds with the fact that searches of black individuals result in discovery of contraband only 21.7% of the time, while similar searches of whites produce contraband 34.0% of the time.

The assessed fines are harsh for the mostly Black defendants in Ferguson, a city where the median income for Blacks is just over 50% that of Whites and more than a quarter of those Blacks live below the poverty line. The report offers an example of the St. Louis County’s inequality by using another city as an example:

The story runs the reverse on the richer side of town…

[T]he affluent west-county suburb of Chesterfield, with a population of 47,000 (about fifteen times bigger than Pine Lawn) and a per capita income of $50,000, collected just $1.2 million from municipal fines, according to statistics compiled by the state.

More than a third of these courts close their doors to the public, according to ArchCity’s report. “The public” also includes the defendant’s children. ArchCity reported that a defendant was barred from bringing his children to the court, and was charged with child endangerment when he left the kids with a friend.

Since Human Rights Watch and Amnesty International have dispatched monitors to Ferguson—which has to be a pretty embarrassing blow to American democracy—I suppose the two organizations would be interested in looking at ArchCity’s research, including the section where the Municipal Courts deny defendants of their right to an attorney; or how the City of Bel-Air fines financially-stressed Black residents for failure to subscribe to the only city-approved waste removal service– even if those residents removed the trash on their own.

There are plenty of reasons why this crazy fine and incarceration scheme provide no sustainable social benefit.

The fines drive poor people into a new level of hardship; the jail time can cause a loss in wages, employment and connection to families; a jail record stands in the way of future employment; homelessness will certainly not improve, and will likely become worse. All the while, tax revenues for the county are sub-optimized.