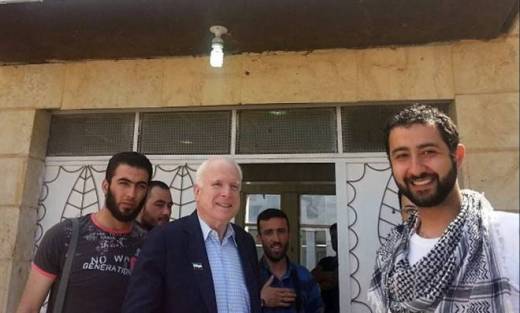 Okay, I’ll ask: why did Senator John McCain visit Syria and meet with “The Rebels”?

It wasn’t too long ago that Russia finally agreed with the US to have a Syrian peace conference in Geneva. Now Senator McGrimace meets with the Syrian rebels this week, and then talks to the press about arming the rebels and establishing a no-fly zone?

McGrimace spent a few months back in 2008 to make the case that he’s not fit to be President. Add Secretary of State to the no-nominate list.

I’m not a fan of Syrian President Bashar al-Assad, but I must admit he nicely summed up these “rebels” in his interview with Argentina newspaper, Clarin (translated):

“They are not a single entity. They are different groups and bands, not dozens but hundreds. They are a mixture and each group has its local leader. And who can unify thousands of people? We can’t discuss a timetable [for a ceasefire] with a party if we don’t know who they are.”

I wrote about these fragmented rebels about ten months ago. Perhaps Assad and I have overactive imaginations…

Back to McGrimace – is he really this dumb, or is he an agent for some broader evil purpose, and he’s simply not a smooth liar?