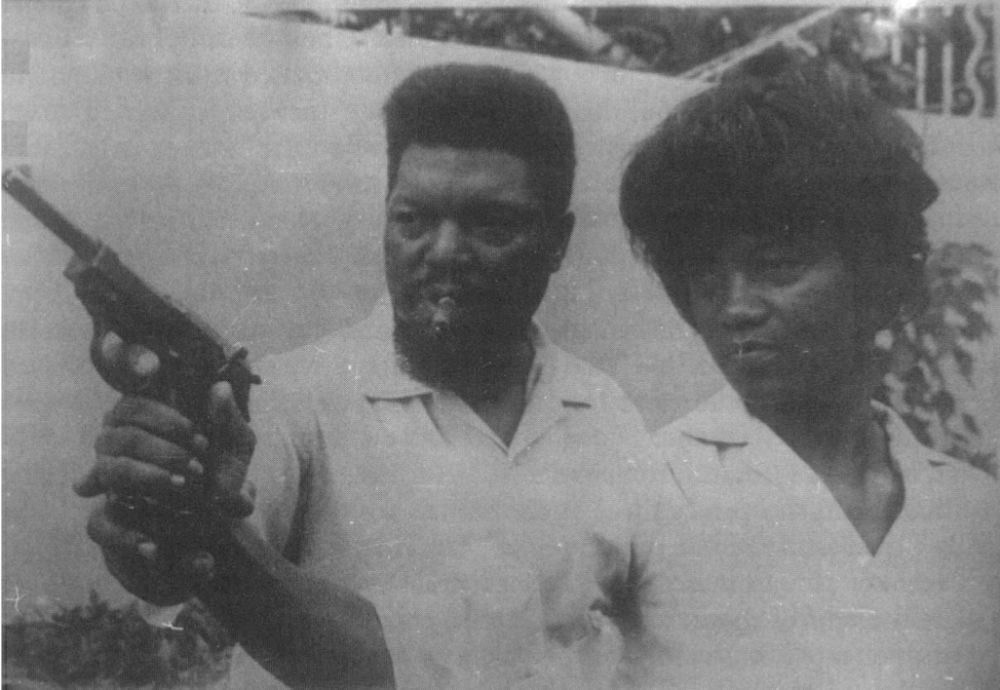 I’m having coincidental Women’s History Month thoughts about what bothers me more — the way mainstream accounts of women in the the so-called Civil Rights Movement seem to focus only on the near-mandatory hagiographies of Coretta Scott King and Rosa Parks while ignoring the leadership and bravery of other African-American liberty seekers like the late Mabel Williams, or how mentions of Williams seem to always stop at “Oh, she’s the wife of Robert F. Williams.”

And since I’ve been in the Williamses’ orbit lately, let’s dig deeper …

I pulled the Mabel Williams quote you see at the top of this piece from the brilliant oral history she provided to the University of North Carolina-Chapel Hill, through a conversation she had with David Cecelski. Reading her account of life as Black prey in 1950s Monroe, North Carolina gives you a deeper sense of why the town couldn’t become any more of a haven for White terrorist activities toward African descendants.

The local branch of the Ku Klux Klan respectively used Monroe’s city hall lawn and police station back then as a public petition site to run Robert Williams out of town and a source for new white-hood recruits.

Segregation ran so deep — literally — that admitting and treating Black patients, including babies and pregnant mothers, were restricted to a filthy hospital basement.

Local NAACP membership was reduced to a metaphysical argument since the Black professional class — the NAACP’s typical source of core strength — was scared away from joining the group out of fear of being either branded as communists, isolated from economic opportunities (i.e., jobs) or targeted for physical violence.

So if you asked why would Mabel Williams roll up to the front of her house with a shotgun in a town whose White supremacy was lacquered in place by government officials, law enforcement, White terrorist organizations and town citizens who had no problems with supporting domestic terrorism …

By the way, the cops avoided a gunfight and didn’t arrest Mabel’s husband that day. The busted headlight came from an earlier incident where KKK sympathizers tried to ram Robert Williams’ car off the road — an incident that was passively observed by Monroe police officers. Mabel Williams was likely correct in her fear that drove her to draw the shotgun: an arrest would have meant a lynching that evening. Literally.

Before her marriage, Mabel Williams was a student/athlete who excelled in both areas, and was supported by a community with a sufficient sense of Blackness that enabled her to endure life in Monroe.

And she became much more than a spouse and long gun handler.

She — in collaboration with Robert — co-founded a Black Progressive newsletter called The Crusader as a way to counter the dominating White supremacist messaging of the time. She was one of the journal’s writers and gathered news clippings from around the world to select for inclusion.

Mabel helped to coordinate the local NAACP’s unofficial intelligence-gathering apparatus, given that a number of the organization’s members were domestic workers for Monroe’s rich and powerful White families. She shared an instance with Cecelski:

I remember one particular incident where Robert was going on trial for something the maid for the judge said that the judge came in that morning at breakfast and said, “Oh honey — ” to his wife. “Oh honey, I’m going to be a big man today.” And she said, “Why? What’s going to happen?” He said, “I’m going to send that nigger Robert Williams to prison.”

Mabel helped Robert write the book Negroes with Guns and launch the brilliantly-titled Radio Free Dixie — a show broadcasted from Cuba that featured Jazz and political conversation — while living as exiles.

One of the most important things Mabel did subsequent to her return to the United States was to counter the false narratives about herself, Robert and the Civil Rights Movement by documenting her account of the struggle in Monroe.

For example, she demystified how the National Rifle Association initially supported Robert and other Black Monroe gun club members with a local charter:

… when Robert sent off for the charter he had himself as an author. He had Dr. Perry as a doctor. He had some of the — oh, he had one of our officers McDowell, as a businessman. He had, I think, the women he put down housewives. And he put construction, contractor for the construction workers. And we got our first charter like that.

In other words, Williams never indicated that he was affiliated with the NAACP, and it doesn’t appear that the NRA knew who Robert Williams was at the time.

Mabel had her own ideas about how she and her husband received a charter to power their armed struggle against the Klan:

I’m sure when we joined and the years after then, had they known we were a black group, they would have revoked our charter.

Mabel’s words also made clear that neither she, Robert nor their Monroe crew were random gun nuts:

But the ironic part that I want people to know is that although we had an association with guns, we knew how to use guns. We trained other people how to use guns, our children included. We never had the occasion to have to shoot anybody. And that if, you know. That’s remarkable because a lot of people, when they think about having guns, they think about killing folks. And Robert always—. He was the ultimate teacher, always. He always taught the other people and us that a gun is a weapon that can do terrible damage to people. And the only reason you would ever pick up a gun is for self-defense and not for anything aggressive or not to scare off anybody, and not to play with anybody. But it was serious business when you really had to pick up a gun.

In addition to continuing her social activism and finishing Robert’s memoirs, Mabel was engaged in community economic development projects like the restoration of Idlewild, Michigan — a Black Shangri-La that materialized in the 1920s, and became the hottest resort town for Black families and celebrities alike during the 1940s and ’50s.

The statutory death of Jim Crow resulted in the disintegration of Idlewild in the first place, but I won’t go there today …

Mabel transitioned in 2014. May she continue to Rest in Love.

song currently stuck in my head: “it runs through me” – tom misch feat. de la soul