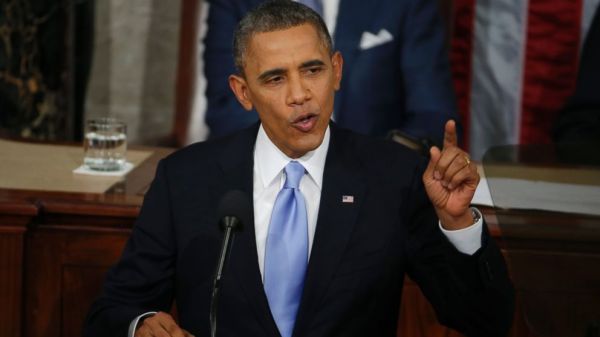 You didn’t think I’d be silent about President Obama’s State of the Union address, did you?

First, we hear that Obama couldn’t push through his true agenda because of Republican Congressional opposition—even though his Democrats dominated both houses during the first two years in office.

But he now wants to raise the minimum wage, provide free college education, and roll out other policies that would position him as a working person’s President—while THE REPUBLICANS CONTROL BOTH HOUSES?

Call my thoughts tainted, but someone in the White House thinks we’re stupid.

I can press the “post” button now and say I’m done for the night, but I want to explore this speech further…

The economy is “strong”? Please. Most of the new jobs created under Obama’s watch are pulling in lower wages and fewer hours, and the financial markets have roared back to only mirror the same Damoclean state that existed just before the 2008 crash. Plus the middle class President Obama promised to save continues to die. For the first time in half a century, the majority of public school students live in poverty.

And he still doesn’t want to jail a banker for creating this mess.

Obama’s ultimate victory for the 0.1 percent—the Trans Pacific Partnership (TPP)—has the potential of presenting the death blow to middle class groups in America and elsewhere while making the poor find out what deeper poverty looks like.

Read this and this if you think the US is now free from the “grip of foreign oil.”

While Obama’s overseas drone policies remain unchanged—complete with the deaths of innocent people—there are five reasons why I take Obama’s talk about US military might with a grain of salt: Libya, Yemen, Afghanistan, Iraq and Syria. Regarding the last two countries, the Islamic State has increased the amount of land it controls—despite US military air power. But you know what I think of that by now…

In fact, the War on Terror has arguably made the world a more dangerous place.

I agree with a few points Obama made. Placing additional sanctions against Iran is dumb, and I’m down with free college.

But thinking about the latter reminds me of my earlier statement about the President’s timing for his populist speech. My guess is that he wants to get an early start on a distracting, partisan skirmish among Americans so that more attention is placed on 2016. Who cares about the present, I guess…

song currently stuck in my head: “want you” – roy ayers

This entry was posted in Economics, Politics, War and tagged address, Barack Obama, college, Iran, speech, state of the union. Bookmark the permalink.