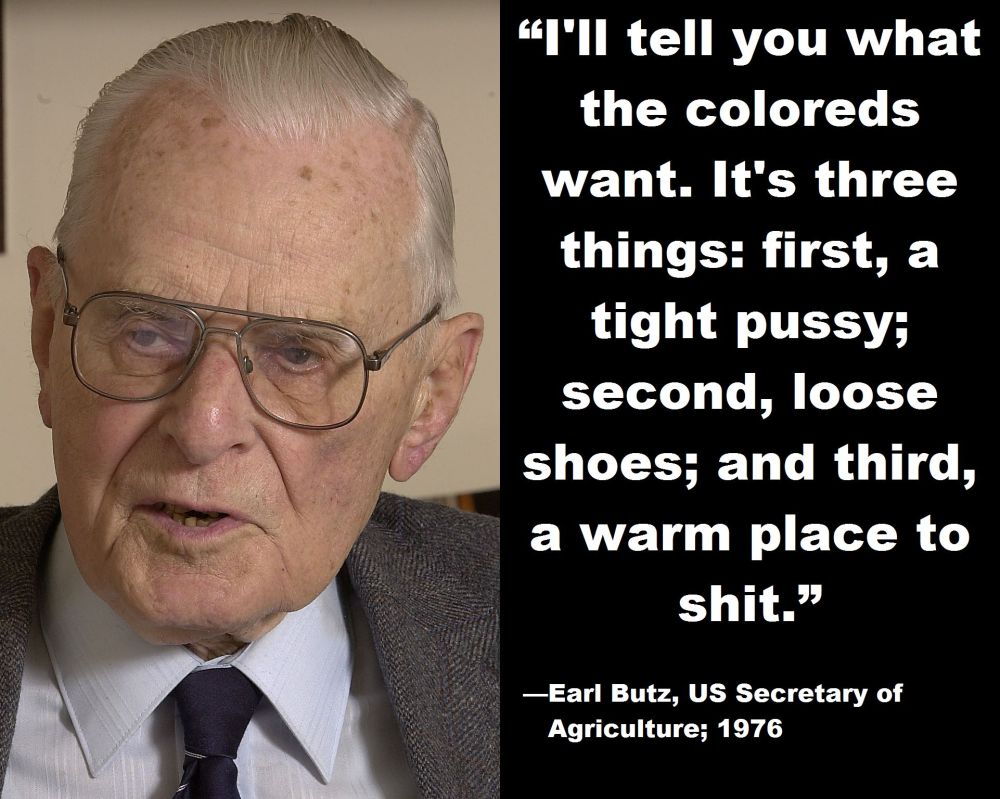 While you celebrate another victory in the name of post-racial America after the NBA’s lifetime banishment of racist Los Angeles Clippers owner, Donald Sterling, I want to remind you of a 38-year old racial incident that follows a familiar pattern.

The late Earl Butz, US Secretary of Agriculture during the Nixon and Ford administrations, made what he apparently thought was a hilariously insightful remark about Americans of African descent in 1976 that subsequently caused a crapstorm of controversy. The quote, and the face of its producer, are in the graphic above. The controversy was partially illuminated by the fact that Butz was a high-profile personality.

African Americans, joined by other races, were in an uproar over Butz’s remarks.
Just as we are with Sterling’s remarks today.

Black organizations like the NAACP voiced their stress over Butz’s remark.
Just like they [eventually] did with Donald Sterling.

Prior to Butz’s statement about Blacks, he made a bigoted remark about Italians while simultaneously mocking an Italian accent. Either no one saw the transgression or people decided to ignore it.

Housing discrimination accusations involving Sterling gave us a warning about his racist views well before 2014, and many of us either never heard about this news or decided to ignore it.

But 1976 was more than the year of America’s bicentennial—it was also an election year, and President Ford had his eyes on a full term. Butz became a distraction to Ford’s aspirations. Therefore, Butz had to go.

The NBA can’t position itself as a global brand for families if it has owners like Donald Sterling hanging around. Besides, keeping Sterling in the fold would make us wonder what the other owners are like. Therefore, Sterling had to go.

Did Butz’s removal result in preventing the evisceration of New Deal agriculture programs or the creation of Big Ag and Big Food – a combination that many health experts say has blown-up the waistlines of all Americans, and especially those of Black folks? How much smaller did poverty among African Americans become after the removal of Butz? Speaking of Butz, he chilled in Purdue University for his remaining years, and aside from another self-inflicted wound concerning misrepresentation of income, he seemed to do fine with his life.

Sterling, other than taking a blast to his ego, will be fine. Meanwhile, Americans of African descent continue to trail behind others in health, wealth, political power and quality of life.

Sure, Sterling needed to go. In fact, he needed to disappear from the scene a long time ago.

But Sterling’s removal doesn’t strike me as real power when I think about the larger racial inequalities I just mentioned.

Imagine if Butz discussed a fourth thing Black people wanted. It wouldn’t surprise me if the word “Chicken” came out of his mouth.

That’s why I can’t call this apparent victory over Sterling real power. I call it Chicken Wing Power.

I completely get the idea that the way Black folks are defined can dictate external perception, and in some cases, self-worth.

But until we aim beyond beefing with Merriam-Webster and create the cultural, institutional, social, political and economic foundations which will change the policies that allow for rich people like Donald Sterling to discriminate against others, we’re only talking about Chicken Wing Power.

And that kind of power suits some people just fine…