Posted on October 4, 2013 by mentalunrest 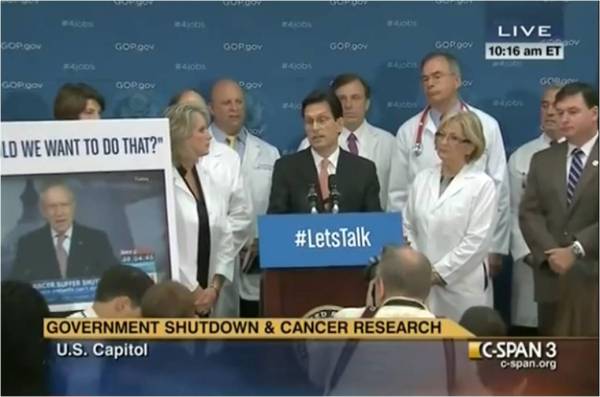 Seriously, you can’t make this stuff up.

the convergence of the federal government shutdown and desperate public relations maneuvering by the Party of No Brains has made Sarah Palin’s anti-Affordable Care Act fantasy warning come true – WE NOW HAVE DEATH PANELS!

BUT – the panel did not come from Obamacare; it came from the Party of No Brains!

Let’s break this down…

You may recall the time when Sarah Palin warned America about how Obamacare will create a gang of bureaucrats charged with determining which Americans will live and die through the rationing of health care services.

Fast forward to the present, where the PONBs is beginning to look like bigger jerks for their role in catalyzing the government budget impasse, and are beginning to propose bills that provide piecemeal funding to specific government operations and would hopefully reduce the PONBs’ Jerk Index. Public relations funding targets have been parks, the National Guard, and the National Institutes of Health (NIH) inclusive of life-saving programs that help young patients get treated for cancer. Then, a group of lawmakers called the GOP Doctors Caucus, in the name of supporting the NIH of course, donned medical uniforms and appeared with House Majority Leader Eric Cantor to discuss their life-and-death legislation with the press.

This NIH move, to paraphrase the famous words of Bill Duke, is where the PONBs played themselves.

(Laughing) Regardless of the angle you use to spin this, having a gang of bureaucrats cherry-pick which sick Americans should receive government assistance during the shutdown constitutes a DEATH PANEL.

You may know by now that I only rap about one main idea per post, but since it’s Friday and you only live once, let me spend some extra time with this stupid press conference…

Somehow, the PONBs found the hypocritical route to justify why government spending makes economic sense in this instance, as expressed by GOP Representative Todd Rokita:

“There are times that the private sector cannot be reasonably expected to do the research and development needed because the issue, the syndrome, the disease, might be so rare that it is economically prohibitive…”

I’ve made this point on other channels in the past – Rep. Rokita’s argument applies to plenty of industries other than health care.

And what’s up with those legislators dressing in lab gear for the cameras?

Did they just come from the operating room? Or took a break from doing Pap smears all morning? Or they’re going to deliver Siamese twins after the presser?

Should we expect these costumes next week?

Did any of these concerned legislator doctors think their theatrics may insult anyone’s intelligence?

It seems clear to me that the Caucus and Rep. Cantor couldn’t care any less about kids in general — save for their own — or they would fund ALL programs that help kids. Let’s also include the adults here.

Better yet, the PONBs should stop wasting time with silly cherry-picking for public relations purposes and fund the entire government…

2 Responses to SARAH PALIN IS RIGHT – DEATH PANELS ARE REAL!