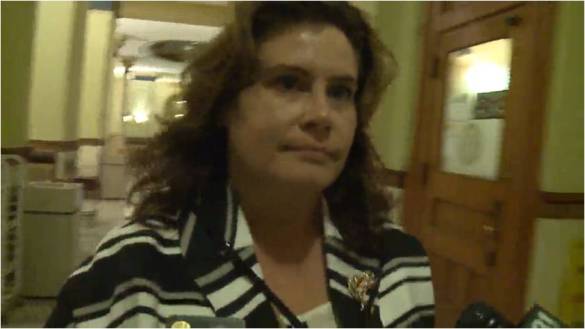 Any politician who brings a box of Popeye’s chicken and a smirk to a State Senate hearing about reducing poverty as a “silent protest” in support of a colleague who correlates Black folks’ supposed fried chicken fetish with being broke is not even remotely serious about discussing anything. We have respective Colorado State legislators Lori Saine and Vicki Marble for our latest entry to the post-racial chronicles.

And in what strikes me as an ancestral nod to the Klansmen who used hoods to divorce their identities from their bigoted beliefs, Saine – followed by a reporter and a cameraman who wanted to get additional detail about her Popeye’s chicken gesture – walked throughout the building for three minutes while hiding behind her hood of choice – the terse and repetitive “I gave my statement.”

If Representatives Saine and Marble want to have a productive discussion about poverty and healthy eating, why not support national campaigns like First Lady Michelle Obama’s Let’s Move? The program may not be perfect in my eyes, but it’s certainly more productive than a box of Popeye’s and a Smile.

Or how about working with the hypothesis that black health issues are likely driven by a lack of access to critical information and resources, and then launch a statewide initiative to close the gap? Projects like a setting up greenmarkets in poor communities work wonders.

Instead, Saine shows up to a State Senate hearing with a box of fried chicken.

Wouldn’t it make sense to build a business case for erasing poverty? Hell, let’s think smaller for a moment—why not build the case for investing in the health of poor people by calculating benefits like reduced health care costs?

Nope. Rolling up to the State Capitol with Popeye’s in-hand seems much easier.

The camera doesn’t flatter you, Representative Saine. Stay off the Popeyes.